The impact the Sapphire Service is making was recognised by Sandwell and West Birmingham Hospitals NHS Trust when it shortlisted the team for a coveted Star Award 2018. 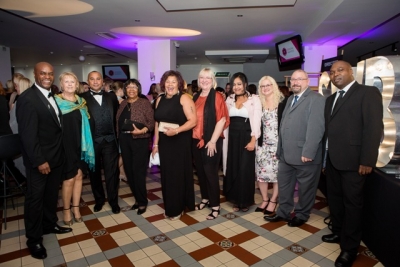 More than 500 nominations were received for the awards which celebrate the exceptional care, compassion, hard work and innovation shown by staff, volunteers and members of the community.

The whole Sapphire team (pictured right) enjoyed a night at the gala awards ceremony at Villa Park in October.

Toby Lewis, the NHS Trust’s Chief Executive, said: “This year we received the largest number of nominations in the history of the Star Awards. Each nomination had a common thread – our organisation is made up of truly remarkable people.”

Congratulations to worthy winner Janet Dearn from the League of Friends.

Dates for your Diary

Sorry, no events are listed for this category.

Craft sessions, bingo, quiz time, informative talks, sing-a-longs plus a delicious lunch ...just some of the things taking place at our weekly Meeting Centre in Oldbury for people living with dementia and their family carers.